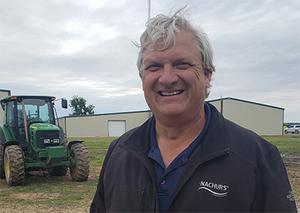 Perry Galloway is a sixth-generation farmer from Woodruff County, Arkansas.  His family, both his mother’s and father’s, has owned the land he farms since they acquired it from the US Government in the 1850s.  He is the last active farmer between the two families, though his brother, Charles, is still involved in various aspects of the operation.

Perry has been farming all his life, but spent the majority of his younger years in Mississippi, attending Manchester Academy in Yazoo City, then graduating from Ole Miss with a business degree before moving back to the family farm in Arkansas.

His farming operation consists of approximately 10,000 acres of irrigated row crop, rotating annually between soybeans, corn, rice & wheat – though soybeans generally comprise the lion’s share.  Ironically, his operation is still known as Galloway Cotton Farms, though he hasn’t raised cotton in years.  In addition to his row-crop operation, Perry, who is also a pilot, operates Broadview Aviation, LLC, a crop dusting business; as well as Hefty Seed Co., where they sell seed, chemical and fertilizer in Augusta, AR.

Perry, who is also a certified crop advisor, first accomplished his goal of 100-bushel soybean yield in Arkansas cutting over 108 bushels in 2015.  That was only one (but likely the most memorable) of many awards he and his brother have received for record soybean, corn, wheat and sorghum yields since 2010.  In 2017 he was honored with the Woodruff County Farm Family of the Year recognition.

Mr. Galloway attends First Baptist Church of Augusta, is current Vice Pres & former President of the Woodruff County Farm Bureau Board of Directors, is an alderman for the City of Augusta and a member of the Augusta Chamber of Commerce and Arkansas Soybean Association.  He’s also a member of Angel Flight, a nonprofit organization that relocates people in times of disasters like Hurricane Katrina, where he helped for a year and a half.

In his “spare” time, Perry enjoys traveling, duck-hunting and flying his personal plane, as well as keeping track of his five dogs – Gus, Sister, Camry, Sonic & Buster – who you’ll likely meet if you stop by his office or catch up with him around the farm.