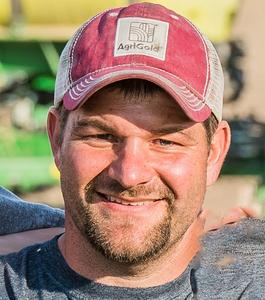 As a fourth generation farmers, Brooks and his brother Brandon have farmed alongside their father, Jerry in Northern Knox County.   The Cardinal farm has been blessed enough to not only grow corn, soybeans, wheat, but also watermelon. They also own Cardinal Farms Trucking, and Cardinal Farms Produce.

Cardinal Farms has an aquifer supply. Therefore, they are able to be very aggressive in watering and irrigating 45% of the ground. For several years they grew seed corn, now that the demand in the area for seed corn has gone down, Brooks and the team has started working with high management corn.  “I have been very happy with my progress in the high management corn and am going to continue to set the bar higher every year.” ~ Brooks Cardinal

Brooks and his wife Nikki have 5 boys they hope will continue the Cardinal farming legacy.  Great grandpa (Bill Cardinal Sr.) came to Oaktown in 1941 and rented a 1,200 acre farm. He put his first corn crop in with 2 teams of horses pulling 2 row planters. The following year he upgraded to two International M tractors and an Oliver. Back then with no irrigation, they were lucky to even get a crop. Great-grandpa Bill put his first Irrigation up in 1971.  He would then pass the farm on to Grandpa Bill Cardinal Jr. who had 3 Boys of his own that he would pass the farm to Jerry Cardinal.  He was one of the 3 boys that has lead the Cardinal Farm to where it is today.

Fertigation has been a part of the Cardinal operation for several years. It started 20 years ago, but with lighter soils and the leaching of nitrogen.  In the last five years, Cardinal Farms started adding more nutrients, forcing them to change their regular irrigated ground into high management irrigated ground.

Cardinal farms does weekly tissue test on high management corn to ensure they know what nutrient levels are doing in the plant.

Farming with family has it’s benefits.  The Cardinal brothers are very particular about how certain jobs are done, though. Brooks does all the corn planting and shares the soybean planting with Brandon. Brooks does the side dressing.  Brandon manages the watermelons and spraying.  In the fall, Brooks runs the trucks and the grain system while Brandon runs the combine. “Sharing responsibilities takes a load off of each of us, for sure.” ~ Brooks Cardinal

Brooks Cardinal is Sponsored by: