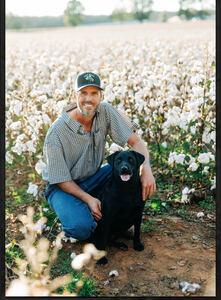 Eric Reed is a first-generation farmer in Middle TN on the TN/AL border.  His farm is a true family operation that includes the help of his 12-year-old son Owen, 17-year-old daughter Madison and wife Erin.  They operate the farm along some part time help.  Eric has worked in agriculture since graduating high school.  In 2007, he started farming with his wife and her family, Brannon Farms.  Since they own a cotton gin, they only grow cotton.  Eric decided to take a risk and set out to farm in his own to add more diversity to his farming practices in 2016.  In 2016, Eric added 300 acres of corn and 100 acres of wheat/ soybeans to his 1,200 acre operation in plans to start a solid rotation.

Eric sets his goal to high level and growing grain for the first time was a challenge after averaging over 1,110 lbs. of cotton per acre in the past years.  After a lot of help from his crop consultant, his yields have increased drastically from 2016 to this past year.  In 2016, Eric averaged 49 BU of soybeans and 175 BU of corn.  That increased to 83 BU of soybeans and 251 BU of corn for 2019.  All of the land that Eric farms is dryland.  Eric has learned to pay close attention to every aspect of raising his crops including fall preparations to tissue samples during the growing season.  2019 growing season was the first year for Eric and Madison to enter the National corn yield contest and the State of TN Soybean Contest.  Eric placed first and set a state record with 315.0644 BU for Alabama Class A: Conventional/ Non-Irrigated and placed first in the TN soybean contest with 89.15 in the Non-Irrigated Class.  Madison placed first in the state of Tennessee Class A: Conventional/ Non-Irrigated with 328.8126 BU.