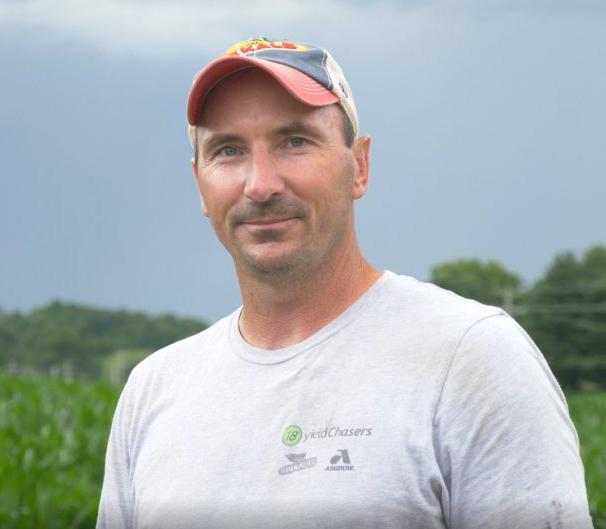 As a fifth generation farmer, Kevin Kalb is one of the top farmers in the world. Based in DuBois, Indiana (also known as the “Poultry Capital of the World”) Kalb manages the operation of the family farm under the same name, Kevin Kalb Farms, that produces corn, soybean and turkey. As a father of four, husband, business owner and farmer, Kevin takes his competitive spirit to the next level in Corn Wars Season 1 on the same land that his grandparents farmed.

Originally encouraged by his seed dealer, Kalb entered the world of competitive corn yield contests in 2007. Having never heard of the contest before, he entered Kevin Kalb Farms without a strategy, choosing mostly to farm for the contest as he always had. That year he made one small exception, a single fungicide application. Combined with a growing interest in progressing the industry forward by maximizing his own yields, Kalb quickly became known in the world of high-yield corn farming. That year, as a first time applicant, Kevin Kalb Farms placed 2nd in the dry land conventional division with a 280 bushel-per-acre yield.

Kalb credits the high yield contest in changing the way he farms. “What I’m doing now is totally different than what I was doing back then” told Kalb in reference to 2007 in Successful Farming Magazine during an interview early in 2017.

Ten years later, Kalb has 17 national placements in the high yield contests, as well as three state placements for the highest yield in Indiana. His personal best came in 2019, when he delivered 394 bushel-per-acre results. Kalb now credits new techniques and advances in the agriculture industry with his climbing numbers. Kalb even produces his own starter fertilizer made from turkey manure rich in nitrogen, phosphorous and potassium to gain the results he needs. Laying down up to 2 tons of manure per acre, this process helps break down any residuals left behind in the ground from harvest. With no rest for the weary, Kalb swears that this method, done after harvest in the fall, is critical for high yield results the following year.

Kalb also depends on weekly tissue samples during the growing season, which helps him determine what nutrients and micro-nutrients his crop needs to deliver high yield results. Though Kalb will be the first to say there is no one distinct formula that works for everyone, he has certainly found one that works for him. In 2015, Kalb finished a close runner-up in the contest’s non-irrigated division with a yield of 332 bushels-per-acre at 44,500 seeds per acre.

Kalb achieved his best in 2016, coming in 1st with the highest yield in the AA Non-Irrigated category of the annual National Corn Growers Association Corn Yield Contest well ahead of the competition with 339 bushels-per-acre; a number that would also place him 1st in the Indiana state contest through the NCGA in the same category. Also in 2016, Kalb was recognized as a top soybean producer in the US as a winner of the 2016 Asgrow National Soybean Yield Contest with a yield of 95 bushels-per-acre.

Well-known in the farming community, Kalb is an authority on high-yield farming and is often asked to share his knowledge and expertise with farmers looking to maximize their crops yield through speaking engagements, videos, magazine articles and panel discussions. When he’s not busy on the farm, you can find him watching his kids play softball and baseball.

Kalb is the first to announce his goal for the upcoming harvest on Corn Warriors – to surpass the world record set by Francis Childs for the non-irrigated corn yield record. Kalb will push himself even under adversity, in order to obtain the win.

Kevin and Kalb Farms is Sponsored by: